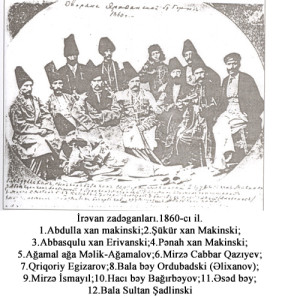 The famous Turkish chronographer and geographer Ovliyya Chalabi travelled Chukhur-Saad beylerbeyi in 1.647 and gave detailed description about Iravan fortress and the city in his book “Sayahatname” (“Travel book”).  He noted that there were approximately 2.060 houses covered with clay roofs in the inner part of the city, about 3.000 guards, 3.000 Khan’s troops, 7.000 provincial soldiers in the fortress.  If we make approximate calculation on the basis of this information (5-6 people in every family) we can come to a conclusion that the number of the population of Iravan city including the fortress was about 25 thousand.

In his book “Travel from Paris to Isfahan”, a French traveller Juan Sharden described everything widely he saw in Iravan in 1673. Describing Iravan fortress and Khan Palace Sharden wrore that the fortress consisting of about 800 houses was bigger than a small city, and there lived only    the pure-blooded Safavids. The traveller wrote that two thousand soldiers were appointed to defend the fortress. Speaking about pure-blooded Safavids, the author meant Shia believing Turkish Gizilbash population.

In the  book “Old Iravan” dealing with Iravan population Yervand Shahaziz  once more confirmsthe information given by J.Shardaabout the Iravan fortress dwellings  and  writes that only the Turks lived in the fortress , but the Armenians had shops there, in the daytimes they used to trade  and in the evenings close their shops and go to their homes.

German traveller Kaspari Shillinger, who visited Iravan in the spring of 1700, affirmed that the Azerbaijani Turks    completely dominated in number and frompolitical point of view in the city of Iravan. He writes:” Only the  Iranians (i.e theAzerbaijani  Turks)  lived  in the city of Iravan (i.e. inside of the city surrounding with fortress walls – editor),but in a relatively large settlement of the city (in Uchkilse ) and different places the Armenian merchants and masters lived for the purpose of  serving the church there.  They gave tax to the Iranians (i.e. theAzerbaijani Turks).

To encourage the Russian troops to occupy Azerbaijan lands, Armenian Israel Ohri who found the way to the palace of the Russian Tsar, shows the ways of seizing Revan (Irevan) fortress in paragraph 7 of his memary records written by the translator for the submission to Peter I on Yuly 25, 1701 and notes that   “gunpowder and other military ammunition depot of  the city is in the Armenians’ hand and they mint Iranian coins there”  I. Ohri writes that more than 300 Armenians live in the city and it is quite possible to strike a bargain with them to unlock the fortress gates and  let the Russian armed forces  capture the city with  the help of sudden attack.   The information about settling of the Armenians in the city of Iravan can be found in the history at different times.  In 1736, after the coronation ceremony held in Mughan, Nadir Shah distributed the Armenian captives among the khans there. Catholicos of Echmiadzin Abram Kretasi crept into Nadir Shah’s favour and succeded in sending some of the captured Armenians from different places to Iravan .At the beginning of 1740 on the initiative of Catholicos Gazar Chahchesin, a lot of Armenians were moved from Rum and Kurdistan (Eastern Anadolu) and they were settled in Echmiedzin and surrounding regions.

428 married Turkish Muslims, 224 married and 9 single Christians were registered in a comprehensive book of Iravan Province compiled after the Ottomans occupation. Considering average family component size of 5 persons , it appears to be clear that 63.5% of 3369 city dwellings were the Turkic Muslims, while 36, 5% was made up of Christians.  If we take into consideration that at that time there lived 100 Christian gypsy (bosha) families (approximately 14.9%) in the city, in that case  it becomes clear that the Armenians  were not in majority in the city as it was claimed by the Armenian chronology authors but only   21.6 % of the population.Taking into account that  European travelers including Christian missionaries  got the information about the population of Iravan city from Echmiedzin Cathedral, so there is no doubt about the information to be  falsified deliberately in the favour of Armenians. For example, the Armenian servant Allahverdi accompanied J.Sarden from Paris to Iravan, but all the information from Iravan to Tabriz he was given by the Armenian innkeeper Arazin. However, the information was distorted in the writings by the Christian travellers, the visible view is that the Azerbaijanis were the aboriginals in the city of Iravan and its surroundings, but the influx of Armenians started much later.

Massive influx of Armenians in the territory of Iravan khanate had begun since the Russian troop occupied Iravan khannet, in 1801.  General Ivan Pashkevich who was awarded to the honorary title “Count Erivanski“for his contribution to capturing the fortress, invited  Ivan Shopen to Iravan.  I. Shopen, who was sent from St.Petersburg to Iravan, held cameral census in the newly established adminstrative- territory “Armenian Province”, in the former Iravan and Nakhchevan khanets territory and the statistical information about the Iravan city population was given under the columns “Muslims”, “Local Armenians”, “Moved from Iran”, “Moved from Turkey”.   I.Sopen gave information about the population of the City, Tepebashi and Demirbulag blocks (estates), but he didn’t include anything about the population of Gala massive that the Azerbaijanis lived exclusively. He noted that 2751 families (11463 people), including 1807 Muslim families (7331 people), 567 local Armenian families (2369), 366 Armenian families(1715 people) moved from Iran and 11 Armenian families (48people) moved from   Turkey, also 46 Christian  gypsy (Bosha) families (195 people) were living in above mentioned three estates of the city.

Most of the Armenians mentioned in the column” Local Armenians”given by I.Shopen, had settled down in the massives outside of the fortress since 1801, and it continued till the occupation of Iravan fortress. The information given about different strata of the city dwellers has particular importance. After the Russian invasion many Khan family members, wealthy families, religious figures left the city and resettled in different cities of South Azerbaijan.

The total number of Christian population in the Iravan khanate on the eve of Russian invension was not more than 20%.  Western researchers G. Bournoutian and R.Hewson write in their article “The Persian Khanate of Erevan” in  the book  “Encyclopedia in Iranian”: “Due to one hundred- year  war in 1804, the population of Iravan decreased to 6000. In 1827, during the reign of the last khan (Husein Khan is considered) the population increased by 20,000 people. Armenians formed only 20% of the population. After the signing of Turkmenchay Treaty and immigration of the Armenians from Iran and Turkey, the number of   the Armenians rose to 40%. The number of general population decreased approximately by 12 thousand people after the Persians (i.e. the Azerbaijanis) left the city.” Referring to the authors we can come to a conclusion that before the Russian invasion 20 %  of 20,000 people was Azerbaijanis, i.e.  4.000 were the Armenians, 16.000 the Azerbaijanis. After the occupation, the city had a population of 12 thousand people, 40%   (i.e.4, 800) was the Armenians, while the remaining 7.200 people were the Azerbaijanis.

Thus, prior to the occupation there were 16.000 Azerbaijanis, but 8.800 out of it were obliged to leave the city, scattered in different places or died as a result of the war. In other words, after the Russian occupation   the number of Azerbaijani population droppedby half.

The information about  Iravan city population in the military-statistical report on Iravan province designed by Peter Uslar, the captain of the Russian Army General Headquarters and released in 1853, shows that there lives 1.437Tatar (i.e.Azerbaijani) and 1.169 Armenian  families. In other words, Azerbaijani families formed 55, 2% of the city population at that time, but 44.8 % was Armenian families. Uslar also writes that against 33 Armenian cleric and 2 melick (monarch) families there lived 42 Muslim cleric, 3 khan (noble), 48 bey (noble),  27 sayyid and 3 dervish famiies in the city. According to the information of  Emperor Russian Geography Society for  1865 year, 6.900 Tatar (i.e.Azerbaijani),  5.770 Armenian families lived in the city of Iravan.  In other words, Azerbaijanis made up 54.5%, Armenians 45.5 %.

As a result of Armenian suppression in Turkey at the end of XIX century   ten thousands of Armenians had to leave the country and flow to the Southern Caucasus. Majority of them settled in Iravan as refugees.  To settle the refugee Armenians permanently, in 1905-1906 massacres of Azerbaijanis were committed four times, a considerable part of the Azerbaijanis either were killed or driven out of their native homes. 900 thousand Armenians lived in the South Caucasus in 1896, but their number used to be 1301 in 1908.  300 thousand more Armenians left Turkey and settled in the Southern Caucasus in 1914-1916.  After settling a part of them in Iravan the situation of the Azerbaijanis  living there deteriorated. İn 1918-1920 during  the reign of the Dashnak government  hair-raising genocide against Azerbaijanis was committed in İravan. Very few Azerbaijanis remained in the city of Iravan.

3.3% (6569 people) out of 200 thousand population consisted of the Azerbaijanis in Iravan in 1939. On December 23, 1947, the USSR Council of Ministers ” signed a decision on “Moving of collective farmers and other Azerbaijani population from the Armenian SSR to  Kura –Araz  lowland  in the Azerbaijan SSR “ . The decision, that served  the  purpose of  settling  of the Armenians in Armenia  moved from abroad,  wasn’t applied to the Azerbaijani population  living in the rural areas. The Armenian authorities  took advantage of the decision and achieved  the realising of their disgusting plan—deporting most of Azerbaijanis living in the city of Iravan.  According to the census held in 1959, only 0.7% (3.413) Azerbaijanis out of approximately half a million population living in Iravan was registered. However, over the past 20 years since 1939, the natural increase of  Azerbaijanis living in Iravan  should have outnumbered at least 10 thousand people.

In Azerbaijan, including Baku the Armenians were living in a very good condition and their number  was  increasing  year by year in contrast to the processes taking place in Armenia.  The  flow of Armenians in Baku and other regions , especially accelerated after the establishment of the Soviet power in 1920. The number of Armenian population  in Baku increased to 207.5 thousand in 1970,  215.8 thousand in 1979. If there were 9.281 Armenians in Baku in 1914, respectively increase (22.3and 23.3 times ) happened comparing  in the number of Armenians  permenantly living there.

After  Armenian separatism in Nagorno-Karabakh in February 1988, the ethnic cleansing of Azerbaijanis began  not only in the city of Iravan, but also in the whole territory of  Armenia and it had been almost  “successfully” completed by the end of the same year. The decision of official Armenia on  military aggression against  Nagorno-Karabakh  bewidered the Armenians living in Baku and eventually they were  obliged gradually to leave the city. On July 18, 1988, at the meeting of the Presidium of the Supreme Soviet of the USSR dedicated to the situation around the Nagorno-Karabakh Autonomous Oblast of the Azerbaijan SSR, Mikhail Gorbachov, General Secretary of the CPSU Central Committee  asked  Sergey Ambarsumyan, the rector of Yerevan State University how many percent of the Iravan population consisted of the Azerbaijanis at the beginning  of XX century. The rector answered:  “I find it difficult to say.” When Gorbachov heard  the answer, he  said: “You  must know it. I’ll  remind you – 43% of the population were Azerbaijanis  at the beginning of the century in Iravan. What is the percentage of Azerbaijanis there now? “S.Ambarsumyan’ answer was:” Now very few, perhaps that is one percent “.

Taking into account all the above mentioned we can come to a such  conlusion. Though  at the beginning of XIX century 80% of the Iravan city population consisted of the Azerbaijanis,  at the end of the same century approximately half of the population,  there remained no single Azerbaijanis as a result of the ethnic cleansing  carried out at the end of 1980s in XX century.