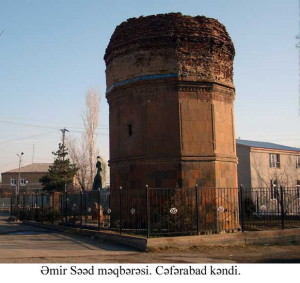 Amir Saad tomb in Jafarabad village situated on the Irevan-Echmiadzin road is the only monument that survived among Azerbaijani historic monuments existed in Irevan city and around it. As after restoration-refubishment works  the official circles of Irevan present the Blue mosque  as “Iranian” or “Persian”, they also call medieval tomb in Jafarabad village “Turkmen tomb”.

The purpose of Armenians is apparent: After implementation of ethnic cleansing policy against Azerbaijanis in the historic Azerbaijani lands – present day Armenia, also to wipe off historic-architectural monuments belonging to them the face of the earth, if it is not possible, to mislead by changing their names.

The name of Jafarabad village of Zangibasar (Masis) region territorial-administrative division was changed to Argavand by the order dated April 4, 1946 of the Presidium of Supreme Soviet of Armenia SSR and the name of Goykumbet village to Ghekhanist from December 1, 1949.

There had been a cemetery of Saad subtribe leaders under Garagoyunlu tribe. There were some tombs in the cemetery, only one of them – Amir Saad tomb survived to our days.

Amir Saad tomb was erected in 1413 by Amir Saad’s son Pir Hussain, one of the Garagoyunlu amirs. The areas under Amir Saad’s rule was called Chukhur Saad, i.e. Saad’s valley still in his time. The territories of Chukhur Saad emirate included lowland part of present Igdir province of Turkey former Surmeli area and Agri Dagh valley. During the reign of Pir Hussain, Kars city and surrounding areas was in the boundary of emirate. According to Armenian historian A.D.Papazyan, the name Chukhur-Saad in Armenian sources  was first noted  in the trade document of 1428   which is  kept in Matenadaran now.  The  sale-purchase document of Uchkilsa (Vagharshabad, present Echmiadzin) village noted that Uchkilsa village was one of the villages of Karpi area which was situated in Chukhur-Saad vilayet of Azerbaijan. In the document which was compiled in Arabic, witnesses called themselves “Saadis”.

One year after  Amir Teymur’s death  in 1406  Gara Yusif, the head of the Garagoyunlu tribal federation,  defeated Amir Teymur’s grandson Abu Bakir in Chukhur-Saad and made him flee.  That was the end of the Teymurid dynasty. Gara Yusif assigned the governance of that area to the chief of Saad tribe Amir Saad again who governed that territory till the end of the XIV century. Amir Saad died in 1411.

Two years after   Amir Saad’s  death in 1413 Pir Hussain built that tomb on his father’s grave.  The main  feature differing  that tomb  from other  medieval monuments was that it was made of local red tuff stone not  brick.   In 1939 renowned researcher of Azerbaijani architectural history Leonid Bretanski made measurements in Amir Saad tomb along with G.Yelkin, L.Mamikanov, D.Motis. L.Bretinski called Amir Saad tomb a unique form of “transition” from Momina Khatun tomb’s brick  architecture to the lithic one.

The first part of   the inscription of the tomb begins with the name of merciful Allah and Ayat 255 of Sura 2 of Koran in Arabic  like in many other tombs.   After that, the names of historical figures of Azerbaijan Garagoyunlu state are enumerated. The inscription says: This sacred tomb has been erected by the order of Amir Saad’s son Pir Hussain- the pillar of the greatest, the most graceful, kindest padishahs and sultans, protector of the poor and vagrants, guardian of the wise and hungry for knowledge, patron to the poor and sufferers, the love of his state. Long live his just ruling. May pure be the soil of the kind, late, embraced by the kindest, Amir Saad. May Allah make ruling of Pir Budag khan and Yusif noye eternal in padishah’s reign, kind sovereign, shah of the shahs of the East and West, pillar of the state and religion, Rajab 15, Hijri 816”. That date corresponds to October 11,  1413 AD.

Armenians’ position is renaming historic monuments of Azerbaijanis which survived in Irevan, as “Persian”, “Turkman” or “Mongol” by falsifying the history and thus concealing the original owner of them. Armenians included the name of that tomb which has been discovered in Abovyan street in the list of the monuments that are under the protection of Armenian government like a ‘Mongol monument’ .

Official Iravan used ‘Turkman monument’ card during the official visit of the new president of Turkmenistan Gurbangulu Berdimuhamadev to Yerevan. On November 28, 2012 in the Great Concert Hall of Irevan there was a presentation of  Gurbangulu Berdimuhamadev’s three books (“Полетнебесныхскакунов”, “Туркменистан” and “Туркменистан – крайисцелений”), which were translated into Armenian. The following day  they took  the president of Turkmenistan to Jafarabad village and showed how they protected   Amir Saad tomb as a ‘Turkman monument’.  Moved by the “care” of Armenians, the president of Turkmenistan signed partnership agreements in different fields with Armenia which of no geopolitical and economic importance for his country and even he articulated Turkmenistan’s intention to export electrical energy to Armenia.

Amir Saad tomb – the relic of Azerbaijan Garagoyunlu state has been included in the list of the protected monuments in Armenia as ‘a mausoleum of Turkman Amirs’ family’.