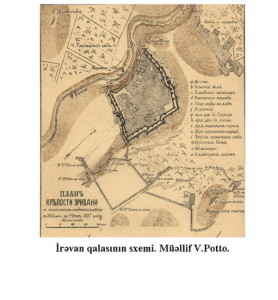 From the beginning of the XV century till the establishment of the Iravan Khanete the area described above was ruled by the Saadi tribe chiefs belonging to Garagoyunlu tribal community. According to the geographical position it was called   Chukhur- Saad, i.e Saad’s hollow.  The family tomb which was built by Pir Huseyn after his father Amir Saad’s death, the ruler of Chukhur Saad (in some resources it is called the country of Iravan) in 1413, is now in the territory of the village Jafarabad (has been called Argavand since 1946), near Iravan city and the Armenians are trying to present tit as “The Turkman Monument”. After the establishment of the Safavid state in 1501, Azerbaijan was divided into four provinces (beylerbeylik) from the administrative-territorial division point of view and Chukhur-Saad was one of them. The capital of the province was the city of Iravan and it was also known as the Iravan province (beylerbeylik).    The Chukhur-Saad province used to be a part of the Ottoman Turkey at certain times and was known with the Iravan province status. .  In accordance with “The Iravan Province review book” compiled by the Ottomans in 1728, the provice was divided into the following parts from the standpoint of the  territorial-administrative division: Iravan city, Girkhbulag, Karbi, Maku, Khinzirek, Gerni, Vedi, Derechichek, Abaran, Goycha, Daralayaz, Mazra , Surmeli, Ighdir, Aralig, Sherur regions, Shorayel (Shurege) and Nakhchivan.

During the reign of Nadir Shah (from 1736) the Iravan province was a part of  Azerbaijan beylerbeylik . In 1747,  after the assassination of Nadir Shah, the Afsharlar empire collapsed and independent khanates were established. After the establishment of the Safavid state in 1501, Azerbaijan was divided into four provinces (beylerbeylik) from the administrative-territorial division point of view and Chukhur-Saad was one of them. The capital of the province was the city of Irevan and it was also known as the Irevan province (beylerbeylik).  Like  other khanates in  Azerbaijan,  the Ierevan khanate  was also divided into districts from the point of view administrative-territorial division and  districts into villages in their turn.

The Iravan city was taken as a separate administrative-territorial unit.  As the center of the khanate considerable construction work was carried out, a number of mosques, caravanserais, bath-houses that were considered masterpieces of architecture were built.  Iravan castle itself was a grandiose architectural complex like a castle-city.

Agha Mohammad Shah  Gajar made  the Iravan  khanete  be dependent on him in 1795. At the same time Shah Gajar issued  the special decree on subordination of   Shorayel and Pembek areas to Mohammad khan, the khan of Iravan. A Russian historian  Ivan Chopin  held cameral census in the territory of former Iravan Khanete in 1829-1832 years and  gave  comprehensive information about geographical position and administrative units of the provinces and villages destroyed as a result of wars.

In 1827 on the eve of the Russsian invasion the administrative-territorial division of the Khanate consisted of 15 mahals and Shorayel Sultanete that was semi-depended on the khanete. The names of the districts (or: mahals) were as follows:

Only two of the mahals –Derekend and Surmeli were situated on the right bank of the Araz River. The availability of irrigation systems and villages’proximity to river basins were taken as a main criterion in the creation of mahals. For example, the villages using the water of the river Zengi were included in the  Zangibasar mahal.