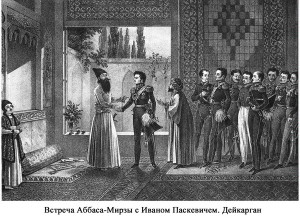 A few days after the occupation of the Irevan Khanate – on October 6, 1827,  Pashkevich gave an order on establishing ” Iravan Interim Department” in that territory as a new Russia regime. General  Krasovski ,the commander  of the local army, was appionted a chief of the  department,  interim commandant of the fortress was appointed lieutenant-colonel Bronevski  and  Archbishop Astarakesi was given an assignment to be an office member.

Interim Office  had to fulfil a number of  responsibilities: to take power in the country, to introduce proper order,  to cater the army constantly,  to defend Iravan, Sardarabad and Abbasabad castles, to make relationship with Georgia, to develop cotton-growing, to increase salt-production, to calculate Iravan khan’s estates, flocks and income, to confiscate all his personal estate and real property.

The Armenians achieved their aims owing to unlimited authorities given to Nerses by Krasovsky.  However 4500 poods grain had to be distributed among the people out of war, the majority of it was given to the Armenians in minority.  Muslims were deprived of the state protection. In regard to it, Paskevich wrote in his letter addressed to the Chief of the General Staff on April 2, 1828:” “I would never imagine that Krasovski will  act only with the will of Nersesi, won’t care about the ruling of the newly captured province ignoring my instructions given to him, won’t patronize the Muslims (three-quarter of the population),won’t  allocate funds for them”. The discrimination against the local Muslims led to the increasing of discontent, many of them couldn’t bear the injustice any more and in the end they had to leave their country and move to Iran or Turkey. Pashkevich worried about assembling of the discontented Muslim population on opposite side of the border. Therefore, he removed Nersesi from his administrative activity at Interim Office. After the signing of Turkmenchay Treaty, Pashkevich removed General Krasovsky from his post— the head of Interim Office, exiled Archbishop Nerses to Bessarabiya for his evil deeds against the Muslims.

According to Turkmenchay Treaty signed on February 10, 1828, the Iravan and Nakhchevan khanetes were annexed to Russia. On March 20, 1828 Tsar Nicholas I approved this agreemen and the next day  decreed  the establishment of the Armenian province. It was said in decree:  ”I pronounce the Nakhchevan and Iravan khanetes that have been annexed to Russia according to the agreement signed with Iran  hereafter  will be  called Armenian province. Supreme Senat will be provided with the decrees  on the structure and ruling of the province in time.“

Taking into account the Armenians’ sevices and loyality during the occupation of the Iravan khanete the newly established adminstrative -territorial unit  was called “the Arrmenian province”. In fact, this name was serving creating a buffer zone consisting of Christian Armenians  who were moved from Iran and Turkey and settled in the newly occupied territories.

Russian authorities removed the word “Armenian” from the province  name after they had realized their plans. After the invasion, Russian  administration regime was not  applied immediately, for a period of time the khanete governance forms were followed. Armenian province was divided into Irevan and Nakhchevan provinces and  Ordubad region. Fifteen  districts of former  Irevan khanete were included into Irevan province,  five  districts into Nakhchevan province, and five districts into Ordubad region. Major-General, a commander-in-chief of the armed forces Alexander Chavchavadze was appointed the Chief of the regional office. The members of the Regional office consisted of two Russian military men, Azerbaijani and Armenian representatives. (Chavchavadze’s daughter Nina was Alexander Griboyedov’s wife who was  a  Russian playwright and diplomat and was killed in February 1829 when he was an ambassador to Tehran).

Major-general Vasily Bebutov (Beybutov),  a Tiflis Armenian,  was appointed to the post of Head of the Province on February 13, 1830. Armenian historian Z.Grigoryan confirmed the prohibition facts on the participation of the Armenians governance of the province and wrote that  when V. Bebutov was  the head of the province  the Russianising policy was strengthened, not only in adminstration centers but also in all districts military and civil posts were occupied by the Russian officials.

On June 23,  1833 Tsar Nicholas I approved a new administrative structure of “Armenian province”. Iravan province was divided into four districts: Iravan, Sherur, Surmeli and Serdarabad. On April 10, 1840 the law was adopted  on a new administrative structure of the Southern Caucasus.  According to the new law  “Armenian province” was released” and it was annexed to the newly established Georogian-Imereti province. Pamback-Shorayel distance was annexed to Alexandropol province. In 1844 the Caucasian  viceroyalty  was established. A new administrative division was approved by the on December 14, 1846.  Iravan and Alexandropol provinces were annexed to the newly established Tbilisi viceroyalty. By the decree of the senate on June 9, 1849 the Iravan viceroyalty was established consisting of Iravan, Alexandropol,Nakhichevan Ordubad and Novo-Bayazid provinces.

In the time of Russian occupation the emblems of Iravan and Gumru (Alexandropol) cities and even the Iravan province were approved. The emblem of Iravan city was approved on May 21, 1843. Here is the describtion of the emblem: Area of the bottom (low) part of the arms had been taken (darted out) from (the) description of the arms of the Gürcü-İmereti province. At the top of Aghri (Ararat) mountaion symbolizing prophit Noah’s ship was described in the first golden area of the forked thyroid board of the emblem.       A blue wavy belt in second golden area  was symbolizing the Black Sea. Between the two areas in the silver background there was a cavalryman holding a spear in his hand. The area of the lowest part resembled the Georgian-Imereti province emblem.

There was neither an Armenian governor nor a vice governor among the rulers of the Iravan province. Turkish origin toponyms existing in the territory of the Iravan province were being kept as they were during the reign of tsarist Russia. Only Iravan was replaced with Erivan (1828), Gumru with Alexandropol and Kavar with Novo-Bayazet (1850). The toponyms marked in the administrative-territorial and topographical maps printed during the Russian occupation once more obviously prove that this territory historically belonged to Azerbaijani Turks.

In the result of the earthquake in 1853 the Iravan castle walls fell to the ground.  Since 1868 Iravan City Police Office had been located in Khan Palace, Sardar Hall. The Caucasian viceroyalty allocated resources for the reconstruction of Sardar hall (Mirror Hall) on the basis of petition of Iravan governor in 1867, 1871, 1874, 1880 years.

There were   a number of caravanserais in Iravan city as well: Afshar, Sardar, Seykhulislam, Taghli, Sulu, Susuz, Haji Ali, Komurchu, Gurju, Julfa, Haji Ilyas, etc. All these caravanserais that used to belong to the Azerbaijanis had been obliterated.

Till the early XX century the streets in Iravan were lit up with gaz and kerosene lamps. In 1907 Haji Ibrahim oglu, one of the rich inhabitants of Iravan city spoke with the initiative for  the construction of  hydroelectric power station on the Zengi River. In 1909 engineer Khalil bey Gasimbeyov, one richer Azerbaijani inhabitant of the city, applied to the city office for the construction of hydroelectric power station on behalf of the “Coorperation” company that he had established together with his colleague Arshak Malkhasyan. In 1911 water pipe-line was drained from the source the Geder River (from Girkhbulag) to the city (approximately from 19 kms distance). Abbasgulu khan Iravansky had an exceptional role in it.

By the decision dated on May 29, 1918, Azerbaijan National Council (Milli Shura) compramised the city of Iravan to the Armenians as a capital city after three independent countries –Azerbaijan, Georgia and Armenia had been established in the Caucasus But during the Dashnak Government exisiting in 1918-1920 years the Armenians perpetrated genocide against Azerbaijanis and vandalism against material-cultural monuments belonging to them in the city of Iravan. The Armenians burnt mosques to the ground plundered the Azerbaijanis’houses and properties.

Discrimination and deportation against the Azerbaijanis in the years of the Soviet Power had become the main component of the policy of Armenia. The re-construction of the city Iravan was carried out in 1924 on the project of Alexander Tamanyan, but in fact, it was serving to erase the traces of Azertbaijanis living there historically. The Iravan City History Museum was located in Blue Mosque, Zal khan (the City) mosque turned to the art gallery of the Painters’ Union, but all the other mosques except Demirbulag Mosque in the city had been razed to the ground. Demirbulag Mosque was set fire by Armenian vandals on the March, 1988. Serdar Palace and the walls of Iravan castle were pulled down and they used the stones to lay out Sahil Boulevard. The old districts where the Azerbaijanis used to live were unbuilt and parks, cinemas, squares were laid out and erected on their places.

Though the Armenians are boasting of ancientness of their capital, Irevan is the only city among capitals in the world that the historical-architectural monuments existing there are not more than 200 years old.  As all the historical-architectural monuments existing in Irevan city belonged to the Azerbaijanis they were completely destroyed by the Armenians.  The name of the city of Irevan has been changed two times so far.  For the first time in 1828 after the Russian occupatioit it was called Erivan, and for the second time, in 1936, it was renamed and called Yerevan (Erivan).  The bitter reality is that the city of Iravan has become a monoethnic city though at one time aboriginal population of it entirely consisted of the Azerbaijanis.