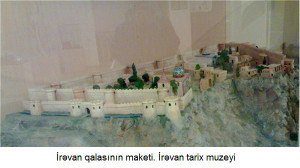 The territory of the city Iravan was annexed by different states in different times, such as Urartu, Sasani, the Arabian Caliphate, Sajids, Shaddadids, Seldgugs, Eldanizians,, Ilhanians, Teymurians, Garagoyunlu Aghgoyunlu, Safavids, Əfsharis,  Gajiars states. Socio-economic development of he city Iravan   as a center goes to the Chukhur-Saad beylerbeylik and the Iravan Khanate periods. At the medieval history sources the name of the city was stated as Revan or Iravan.

During the archaeological excavations carried out in 1950 around Ganli Tepe (hill) situating in the south-western part of the city Iravan, Armenian historians discovered the remainders of Erebuni (Iripuni) fortress built during the reign of Argishtini I, Tsar of Urartu and they connected the history of Irevan with this finding.

Erebuni Fortress was built only for the military fortification purpose and the city infrastructure was never formed aroud it. In fact, ancient Erebuni Fortress had neither spatial nor historical connection with present Armenia unlike the Urartus had nothing to do with the Armenians.  There was a great distance between the Iravan settlement (populated area) which was formed as a city in the Middle Ages and Erebuni fortress found during the archaeological excavations in 1950.

Only after the second half of XX century, the territory of Iravan city expanded  and encircled       Ganli Tepe where Erebuni fortress was situated. According to cuneiform belonging to the Urarturians, it becomes clear that in the first quarter of BC Aghri valley (the left bank of the river Araz and downstream of the Arpachay) was considered to be the territory of the people called Aza untill it was occupied by the Urarturians.

Equation the city Iravan with Erebuni (Irpuni) fortress founded by  the Tsar of Urartu Argishti I in 782 BC,  is a graphic example of falsification of the history. For the sake of his Armenian nationality wife Academician  Boris Piotrovski put forward  hypothesis which says:”Maybe the name of the Urarturian city Erebuni continues living in the name of Yerevan (Iravan), the capital city  of Armenia”. And it gave a great opportunity to the Armenians to celebrate solemnly the 2750th anniversary of Yerevan city in 1968. So, the Armenian set all the bells ringing that “ the city of Iravan was even 30 years older than ancient  Rome”.

Trying to connect the name of Iravan with “Armenian speaking” prophet Noah(Nuh) once more indicates how great liars the Armenians are. “It turned out that”the ship built by prophit Noah (Nuh) took the side to the top of Ararat Mountain.  The very first word that Prophet Noah expressed when he saw a piece of land was “Yerevan” (i.e “Seen” in the Armenian language). The present-day city of Yerevan was supposed to appear in this space.

The great Armenian writer Khachatur Abovyan writes in his article ” Brief essay about the history of Irevan city”: ” In the early thirteenth century the Armenian writers do not even mention the name of Yerevan city, since 1209 (by chronology of Christianity) they have been calling the place “small area”.

According to the legend circulating among the people, the name of Yerevan was either taken from the Tsar Ervand’s name or  came from the words “yerevil, yerevan” that meant “saw, seemed”. It is entirely fictitious.  More precisely, the city had become more popular since 1441, after the conquer of the city by the Persians in period of Shah Jahan (ie. Garagoyunlu emirs).

From that time till 1827  Iravan was occupied sometimes by the Turks,sometimeas by the Persians, had repeatedly passed from hand to hand.Including the last Iravan viceroy the city of Iravan and its province was governed by  10 Turkic pashas and 33 Persian khans.

Irevan province was occupied by the Arab troops in 658. As a rule, the management of he South Caucasus Emirates were entrusted to the Turks during the caliphate.

A famous Turkish geographer and traveler Evliya Chelebi considers Irevan as a settlement to belong to XV century. According to him, in 810 by  Hijri calendar (1407-1408),  a very rich merchant  by name  Khaja khan Lahijani, who was  one of Amir Timur’s  merchants, embarked on very fertile land Revan land,  settled with his family members there, at the expense of growing rice there he made a fortune  and put the foundation of the village. Evliya Chelebi then adds that Shah Ismail, the head of the Safavids State, gave an order to his vezir Revangulu khan on fortress construction    in 915 by Hijri (AH) date (1509-1510). It took him 7 years to complete the construction and  in his turn vezir  called the fortress  “Revan”.

Some researchers agree with the history of building Iravan and the fortress written by Ovlya Chalabi, some are argueing about the city history to go ancient times considering other authors to be right.  The fact is that Shah Ismayil intrusted his knight (military commander) Revangulu khan to construct the fortress on the bank of the river Zengi, strategially important place after he conquered the city of Iravan in 1501. Rəvangulu khan completed the construction of the fortress in 7 years.  As a result of the wars between the Ottoman and Safavid Empires the city of Iravan 14 times passed from hand to hand. Each time the city exposed to certain destruction and was reconstructed late.            In 1554 Ottoman troops seized the city of Iravan putting to rout the city completely. Vezier Lele Mustafa Pasha, the Ottoman governor, re-occupied the city in 1580. Iravan fortress described by travellers and historians was built in the place of the old fortress, by Farhad Pasha during the Ottomans’ occupationto in 1582-1583.

The fortress with the length of 850 m and width of 790 m was in the shape of square and covered 7 ha area.  Double fortress-walls were 10, 5-12 m in height.Single walls of the fortress were on the rocky place washed by the river Zengi. There were three gates of the castle:  in the south Tabriz Gate, in north Shirvan Gate (or Meydan Gapisi (Square Door) and Korpu (Bridge) Gate. In 1679 a bridge that was called Girmizi Korpu (Red Bridge) was built on the river Zengi between Meydan Gate and Old City.

However, in 1604 the troops of Shah Ismayil I took the city back from the Turks, he pursued the policy of “burnt land” when his troops drew back as a result of counter-attack, removed the whole population of Chukhur-Saad beylerbeyliyi including Irevan population to the other side of the river Araz. In 1635 the Ottoman troops re-occupied Irevan.  In accordance with Gasri-Shirin Treaty signed between the Ottomans and the Safavids in 1639 Iravan province including the city of Iravan was redominated by the Safavids. After the collapse of the Safavids, the city was occupied by the Turks in 1723. In 1733 Nadir Shah set free Iravan city from the Ottomans. Independent khanates were created after the death of Nadir Shah Afshar in 1747. The city of Irevan became the capital of the khannet with the same name.

Mosques, caravanserais, bath-houses, recreation parks considered to be rare architectural masterpieces were built in Irevan fortressand the city. Drinkable water pipeline was drained from Giırkhbulag plateau to the city, owing to irrigation canals Iravan became the land of gardens. The earthquake on June 4, 1679 destroyed all the constructions in the city of Iravan, but the city was soon restored with the help of Nakhchevan, Ganja, Karabakh, Tabriz, and Maku counties. Khan Palace or Sardar Palace which are considered to be rare pearls of the Eastern architecture was erected by Iravan viceroy Emirguna khan Gajar (1605-1625) and was improved by Husseyinali khan (1762-1783), the khan of Iravan, in 1760-1770.

European travelers Jan Tavernye, Jan Sharden, Kerr-Porter, James Morier, Monpere, Cameron, Lynch and others were in Irevan at different times, described the Khan’s Palace, its Mirror Hall, mosques, pools and bath-houses in the castle and the city in his writings, as well as the underground marble staired way passing down from the Zangi River. The city of Iravan consisted of 4 massives: Gala, Shahri (or the Old City), Tepebashi (now called Kond) and Demirbulag (now called Karanki arch). There was central Market Square situating between Gala and other housing estates. Shehri housing-estate was stretching along the right bank of the Girkhbulag River to Iravan castle. The Central Bazar (Market) and all the squares, many caravanserais and bath-houses were located in this part of the city. Tepebashi was located on the hill between the Zengi River and Shehri housing-estate. Numerous gardens of famous people of Iravan city separated Tepebashi and Shehri housing estates.  The famous Khan Baghi (garden) and Summer House belonging to Huseyingulu khan were on the right bank of the Zengi River. Demirbulag housing –estate was located in the south-west of Shehri massive and in the east of Iravan castle. Jafar bey Mosque and bath-house, including caravanserai were located in that part of the city.

To seize Irevan fortress locating in a strategic position between the Ottoman Empire and the Qajar state assumed great importance for Russia. However, the Russian troops’ attempts to seize the castle in 1804 and 1808 were gone for nothing.  For more than 20 years Irevan fortress could bravely stand against interrupted attacks of the Russian troops. After all, on October 1, 1827 the fortress collapsed as the Armenians denoted the Russian command the poor points of the castle walls.  When Pashkevich heard the news about the conquest, he was outside of the fortrss and the Russian soldiers had already begun looting. All of the houses were razed to the ground as a result of cannon-balls, the street filled up with corpses. On October 2, a victory parade was held in front of the South Gate of the castle. Victory march was played and cannon salutes were given.It caused collapsing of damaged part of the castle walls. A lot of people were killed. Paskevich was awarded to”Count Erivanski” title and II rank Saint George Order by Emperor.Other generals also got the highest awards.After some time even a special medal was instituted which was named “For the Conquest of Iravan Fortress”.

Russian Emperor Nikolay I was in Riga when the news about the occupation of Iravan castle was given to him.  Hasan Khan’s sword was presented the Tzar. In his turn the Tsar, gave it to a city ratush as a present (This sward is still kept in” “Chamber of Weapons”, in the Kremlin). On November 8, after returning to Petersburg the Emperor visited the church in the Winter Palace together with his family and he prayed there on the occasion of the conquest of Iravan castle.  Under the applause the Emperor carried the keys and four flags with him taken from the castle during the occupation walking in the streets and demonstrating them.

Inspired by the collapse of Irevan fortress the Russian troops occupied also the cities of South Azerbaijan Tabriz, Khoy, Urmia, Ardabil and Selmas at the end of 1827, at the beginning of 1828.  The annexation of Iravan khanate to Russia was formalized on February 10, 1828 according to the treaty signed in the village of Tukmenchay locating on Tabriz-Tehran road.