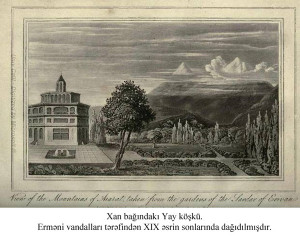 The most remarkable architectural monument of civil construction existed in Irevan city was Khan’s Palace or Sardar Palace in the Irevan Fortress. The headquarters of the Irevan rulers, beylerbeys and khans were in Irevan Fortress in all reigns of the Safavids, Nadir Shah and Gajars. In 1578 beylerbey of Irevan  Tokhmaq khan had planted a garden opposite the Irevan fortress on the right bank of the Zangi River and built a new khan’s palace in the fortress. According to well-known Turkish traveler Evliya Chelebi  who traveled to South Caucasus in 1640s, commander of Turkish troops Farhad Pasha leveled Irevan fortress and paradise-like palace of Tokhmaq khan in 1583 during the reign of Sultan  Murad Khan III. Then he had the fortress rebuilt in 45 days and all supplies and armoury was equipped.

When Irevan province was ruled by the Ottomans, Rajab pasha (1725-1728) had considerable refurbishment works done in the palace. A new khan’s palace was built during the reign of Hussainali khan Gajar (1759-1783). The periods ruled by Hussainali khan and his son Mahammad khan (1784-1805) considered thriving of Irevan city and fortress.

Hussainali khan invited the celebrated architect of his time Mirza Jafar Khoylu to Irevan to built a new headquarter. Khan’s Palace in Irevan Fortress which survived till early XX century was reconstructed under  supervision of architect Mirza Jafar Khoylu. Hussainali khan’s son Mahammad khan Gajar had built Mirrow Salon and Summer House in Sardar garden in 1791 and thus, the fascinating building was accomplished as architectural monumental palace complex. In 1810 the palace-complex was completely restored and a number of ancillary buildings were constructed.

Some parts of the schemes (figures) of Irevan fortress and Khan’s Palace drawn after the Russian invasion are kept in Irevan city History Museum. According to the scale of comprehensive scheme of Sardar Palace compiled in 1837, its area was about one hectar. The palace was situated to north-west of the fortress and a gate opened from fortress to the palace. A two-storeyed palace intended for official ceremonies was trapezium-shape (36x35x31x25 m). In the middle of the palace there was a big veranda for meeting shah solemnly. At the end of the veranda there was built bed area decorated with coloured glasses and separated with embellished gratings which opened to the Zangi river. In the Mirrow salon of the Khan’s palace, in front of khan’s couch there was a star-shape pool made of onyx considered good for health. The pool with a small fountain in the middle was described in Russian painter G.Gagarin’s picture of Mirrow salon. That pool is kept in Irevan city History Museum at present. Apart from  it, there were two more buildings adjacent to Khan’s Palace- one for khan’s close people and the other as ancillary.

Attached Khan’s Palace and Harem with long facade comprised a single architectural composition. Harem was attached to the Palace with a small corridor. Rectangular shape harem’s was 200 feet (1 foot = 0.3048 m) length, about 125 feet width. Harem had a lot of rooms and corridors. After the Russian seizure of the Irevan fortress in 1827, it was converted into hospital. Sardar Harem had mable covering, its mosaic pattern bath also differed with its luxury. Harem had a big summer pool: a pool and a bath still existed till 1830 which were:  15 sazhen (1 sazhen = 2.1336 m) length, 4 sazhen width, 3 arshin (1 arshin = 71.12 sm) depth. These buildings were destroyed during “reconstruction” of the fortress along with a number of other buildings.

According to the specialists, Irevan Khan’s Palace with its architectural form, style, plan, disposition and decoration of interior shared the traits of the palace-complexes built in Tabriz in the reign of Aggoyunlu ruler Sultan Yagub in 1483 and Hasht-Behesht (Eight paradises i.e. eight-layer paradise) built in Isfahan in the reign of Safavid ruler Shah Suleyman in 1669 which are regarded the masterpieces of oriental architecture. Another interesting point is that the palaces of Khoy, Irevan and Sheki khans somehow replicated each other in terms of selection of location and architecture. It gives grounds to say that all the three palaces were built or reconstructed in the style of famous architect of Mirza Jafar Khoylu’s school. There is information that ruler of Irevan Hussainali khan addressed to his relative, ruler of Khoy Ahmad khan  (1763-1786) when he wanted to build a palace. Ahmad khan married to Hussainali khan’s daughter. Hussainali khan died in 1783 and his son Gulamali khan succeeded him. After assasination of Gulamali khan in 1784, his younger  brother Mahammad succeeded him as khan of Irevan. To increase his influence more on the khan of Irevan, Ahmad khan made his 30 year old daughter marry to 12 year old Mahammad khan in 1785.

Well-known Russian writer and diplomat Alexander Sergeyevich Griboyedov was in Irevan khan’s palace in February 1819 as a secrectary of Russian delegation in Iran. Sardar Hussaingulu khan whom Griboyedov considered the first after God in that country (i.e. in Irevan khanate – N.M.), third for his reputation in the Gajars state, organised a feast in honour of the guests as per existing traditions. It would never occur to Griboyedov that a little while after the seizure of Irevan fortress in October 1827, namely in that Mirror salon Russian soldiers would stage his famous play “Woe from Wit” together with him. Griboyedov described the Mirrow salon in details where Hussaingulu khan xan had received the guests.

For a while, khanate of Irevan was on the focus of attention of a number of European and Russian researchers after the Russian invasion. French traveler, geologist and artist Frederic Dubois  de Montperreux traveled to the Caucausus in 1833 and published his book “Travel around the Caucausus” in six volumes in 1839-1843 in Paris. The author also published atlases in five volumes covering maps, plans and paintings. Engraver Nicole Hercule created engravings of Frederic Montperreux’s paintings. The interior, wall paintings and patterns of Mirrow salon, pictures of the building from inside of the courtyard of sardar Hussain khan’s harem were included in the third volume of the atlases.

Irevan Khan’s palace was comprehensively described by German traveler August von Haxthausen who was in Irevan Fortress on August 27, 1843.

Famous Russian archeologist, countess Praskovya Aleksandrovna Uvarova was in Irevan fortress in October 1880 and she described dilapidated Khan’s palace. Armenian researcher Yervand Shaheziz in his book “Old Irevan”  published in Irevan in 1931 quoted from the first volume of P.Uvarova’s book titled “Caucausus. Travel Notes” (Moscow, 1887) on the outcomes of the expedition to the Caucausus: “The Sardar estate (i.e. palace-complex) is situated inside the fortress walls and turrets with its underground passage through the Zangi river, courtyards with fountains, bathhs, harem and two mosques. Only reception hall (i.e. Mirrow salon) survived from Sardar estate decorated with purely oriental patterns, mirrows and paintings, looking like a fancy teabox.

According to art critic N.Miklashevskaya, Sardar palace was destroyed in  1914 and 2X1 m size portraits painted by Mirza Gadim Irevani on the walls of the palace in the second half of XIX centrury were taken from the walls and submitted to the Military History Museum in Tiflis. After establishment of the Soviet Government, the portraits were given to Georgia SSR State Museum, later Georgia Art Museum.

The photos depicting all the details of Irevan Khan’s palace which were taken by photoqrapher D.Yermakov in the 1880s are kept in Georgia State Museum under D.Yermakova’s collection. The issue of photocopying and bringing them to Azerbaijan should be addressed.

Among the pictures of old Irevan there are photos of Irevan fortress and Khan’s palace taken in 1916. It seems the ideas of some authors about razing Khan’s palace to the ground in 1918 are correct. Because in 1918 Armenian-Dashnak government was established in the territory of Irevan province and Azerbaijanis were massacred. Azerbaijani historic-architectural monuments in Irevan city were wiped off the face of the earth namely in that period.

One of the historic-architectural monuments built in the style of Irevan Khan’s palace was Panah khan Makinsky’s house. The residential complex belonging to Deputy of Irevan city Duma, college adviser Suleyman khan’s son Panah khan was situated in the square named after him, on the address 19 Nalbandyan street (former Ter-Gukasov street). The complex comprised a two-storeyed house of the khan, a kitchen, a warehouse, a separate one-storeyed house for servants and stables.  Though Panah khan’s house was included in the list of architectural monuments of Irevan protected by the government, it shared the same fate like any other Azerbaijani monuments in the 60-s of the last century which were wiped off the face of the earth.